Monitoring the diversity and abundance of forest birds and their changes through time is part of assessing the ecological condition of an area. Within Quetico Provincial Park, a long-term monitoring program using equipment that records bird songs at permanent sample plots was established in 2014 to monitor songbirds in specific habitats. The data resulting from these efforts will contribute to broader programs that aim to assess the ecological integrity of Quetico Provincial Park and other areas in northwest Ontario.

The purpose of this report is to provide a summary of the data collected between the years 2014 and 2019 and identify broad patterns of bird-habitat association for the ecosites monitored in Quetico Provincial Park. 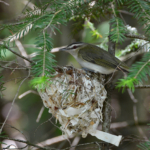 Ecosites are groupings of similar forest and substrate types. Three ecosites were chosen to define the habitat conditions being monitored in this study: Ecosite B055 (aspen-birch hardwood forest), Ecosite B128 (conifer swamp) and Ecosite B048 (Red Pine – White Pine Conifer). Combined, these ecosite account for 43% of the forest area in Quetico. 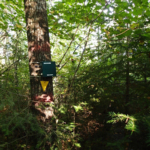 Song meters were placed in stands of these ecosite types and set to record bird songs for 10 minutes at dawn for five days in each of two time periods – May 24th to June 17th and June 13th to July 10th (Figure 2). Recordings were analyzed by specialists in bird song identification to provide species and abundance data.

Between 2014 and 2019, a total of 70 forest bird species were identified. The overall average number of different species heard/plot was very similar between Ecosite B055 (Aspen – Birch Hardwood) and Ecosite B128 (Conifer Swamp forest) at 21.0 and 21.7 species/plot respectively with Ecosite B048 (Red Pine-White Pine Conifer) lower at 18.8 species/plot (Figure 3).

Some species such as Nashville Warbler, Magnolia Warbler and White-throated Sparrow were common across all three ecosites. Others were much more habitat specific such as the Pine Warbler which was only found at the Red Pine-White Pine Conifer sites.

Staffing for this project was funded by the Quetico Foundation.

About the Author: Luiza Moczarski