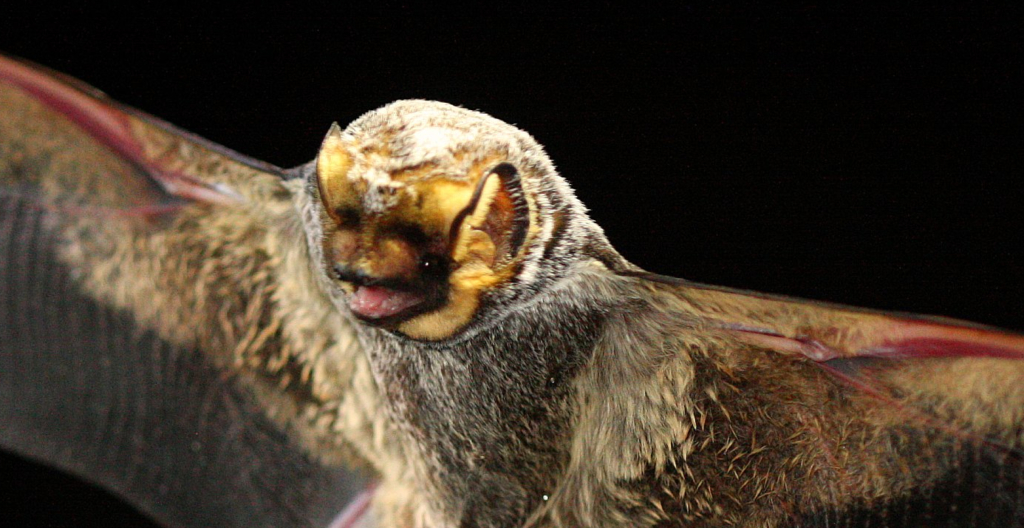 Bats (bapakwaanaajiinh in Anishinaabemowin) are an important component of biodiversity, particularly as a
voracious insect predator. Five species of bat have been reported in Quetico, including three species of
migratory bats – Hoary Bat (Lasiurus cinerius), Silver-haired Bat (Lasionycteris noctivagans) and Eastern Red Bat(Lasiurus borealis) as well as two non-migratory species – Big Brown Bat (Eptesicus fuscus) and Little Brown Myotis (Myotis lucifugus). In addition, Northern Myotis (Myotis septentrionalis), another non-migratory species, has been confirmed immediately north of Quetico but has not been identified from within the Park. However very little is known about their population status or habitat use in the Quetico Provincial Park.

Due to the high risk of White-nose Syndrome (WNS), non-migratory species which hibernate in colonies such as Little Brown Myotis and Northern Myotis have been classed as Endangered in  Ontario. White-nose Syndrome is caused by a cold and damp-loving fungus (Pseudogumnoascus destrutcans) that causes a skin infection in bats. Discomfort from the infection causes hibernating bats to wake up more frequently during the winter when food and water is not available, causes bats to dehydrate and use up fat reserves prematurely, often resulting in death. Initially identified in North America in the winter of 2006-07, White-nose Syndrome was first observed in northwestern Ontario during 2014-2015 and has expanded across the region since then.

The purpose of this project was to determine the presence and abundance of Species At Risk bats (i.e. Little Brown Myotis (Myotis lucifugus) and potentially Northern Myotis (Myotis septentrionalis)) relative to other bat species in Quetico Provincial Park. and compare distribution of identified bat species along survey route.

Methods:
All bats found in Quetico are airborne insectivores which use echolocation to locate, identify and capture flying insects. Bats emit loud, very short, high frequency sound pulses (well above the range of human hearing) and compare the outgoing call to the returning echo to produce detailed images of their surroundings. These sound pulses vary in both frequency and duration between species which allows species identification from recorded calls. By recording calls using an ultra-frequency microphone and analyze the recorded calls using computer software analyze the data, it is possible to identify the bat species that produced the call.

Monitoring occurred in the north-east corner of the Park, along Pickerel River between the Pines on Pickerel Lake and ending on French Lake (Figure 1). The survey route was estimated at 10.1 km and travelled through a combination of lake and riverine conditions adjacent to variety of mature to over mature forest and wetland habitat. Crews monitored the same route using a canoe two to three times a year in June and July from 2017- 2019 for a total of seven surveys. The surveys began half an hour after sunset and canoe speed was maintained at ~5km/hour at ~20m from shore.

Hoary Bats were by far the most commonly identified bat species based on the acoustic monitoring making up 72% of the identified calls from the three years followed Silver-haired Bats (15% of calls) and Little Brown Myotis (10% of calls) while Eastern Red Bats and Big Brown Bat each made up 2% or less of calls (Figure 2). Calls from Endangered Species susceptible to White-nose Syndrome made up 10% of the total recorded calls (all identified as Little Brown Myotis). Unfortunately, because White Nose Syndrome was identified in northwest Ontario a few years prior to this survey, it is not known how this compares to the historical ratio of migratory to non-migratory bats in this part of Quetico. This survey does provide a baseline of relative abundance of bats based on this methodology that future surveys in the area can be compared to.

Because each bat call has a recording time associated with it and as travel speed of the canoes was fairly consistent, it is possible to get an approximate location of each recorded bat. The distribution of bats along the survey route tends to indicate the importance of the riverine habitat for Little Brown Myotis, the river and wetland areas for Hoary Bats and larger open water bodies for Silver-haired bats. Not enough locations were identified for the other species to describe habitat preferences. (Figure 3).