Bats (bapakwaanaajiinh in Anishinaabemowin) are an important component of biodiversity, particularly as a
voracious insect predator. Five species of bat have been reported in Quetico, including three species of
migratory bats – Hoary Bat (Lasiurus cinerius), Silver-haired Bat (Lasionycteris noctivagans) and Eastern Red Bat
(Lasiurus borealis) as well as two non-migratory species – Big Brown Bat (Eptesicus fuscus) and Little Brown
Myotis (Myotis lucifugus). In addition, Northern Myotis (Myotis septentrionalis), another non-migratory species, has
been confirmed immediately north of Quetico but has not been identified from within the Park. However very
little is known about their population status or habitat use in the Quetico Provincial Park.

Due to the high risk of White-nose Syndrome (WNS), non-migratory species which hibernate in colonies such
as Little Brown Myotis and Northern Myotis have been classed as Endangered in Ontario. White-nose
Syndrome is caused by a cold and damp-loving fungus (Pseudogumnoascus destrutcans) that causes a skin infection
in bats. Discomfort from the infection causes hibernating bats to wake up more frequently during the winter.
when food and water is not available, causes bats to dehydrate and use up fat reserves prematurely, often
resulting in death. Initially identified in North America in the winter of 2006-07, White-nose Syndrome was
first observed in northwestern Ontario during 2014-2015 and has expanded across the region since then.

The purpose of this project was to determine the presence and abundance of Species At Risk bats (i.e. Little
Brown Myotis (Myotis lucifugus) and potentially Northern Myotis (Myotis septentrionalis)) relative to other bat
species in Quetico Provincial Park. and compare distribution of identified bat species along survey route.

A plant or animal is considered a Species at Risk when it is in danger of being either extirpated (disappearing from an area it currently occupies) or becoming extinct. Species can also be considered of “Special Concern” if their populations are threatened, for example by significant loss of habitat. Species within Quetico Provincial Park that are listed as Species at Risk are protected under the Endangered Species Act and Provincial Park policies. The QPP Biologist assesses and monitors these species to develop management strategies that will support their habitat and existence in the Park.

Within Quetico Park there are bird, fish, reptile, and mammal species that are being monitored to help with their recovery or to prevent them from becoming further at risk. Quetico Foundation summer employees have assisted with long-term monitoring of several Species at Risk within Quetico, and their work has contributed to understanding of these species’ populations and determining what management actions need to occur to protect these important species. 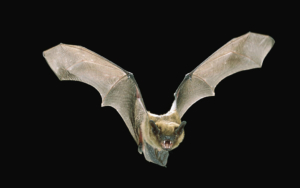 Through nighttime acoustic bat surveys Quetico Foundation staff have worked to understand the populations of endangered bat species in Quetico. Non-migrating species of bat within the park are currently facing threats from White Nose Syndrome. 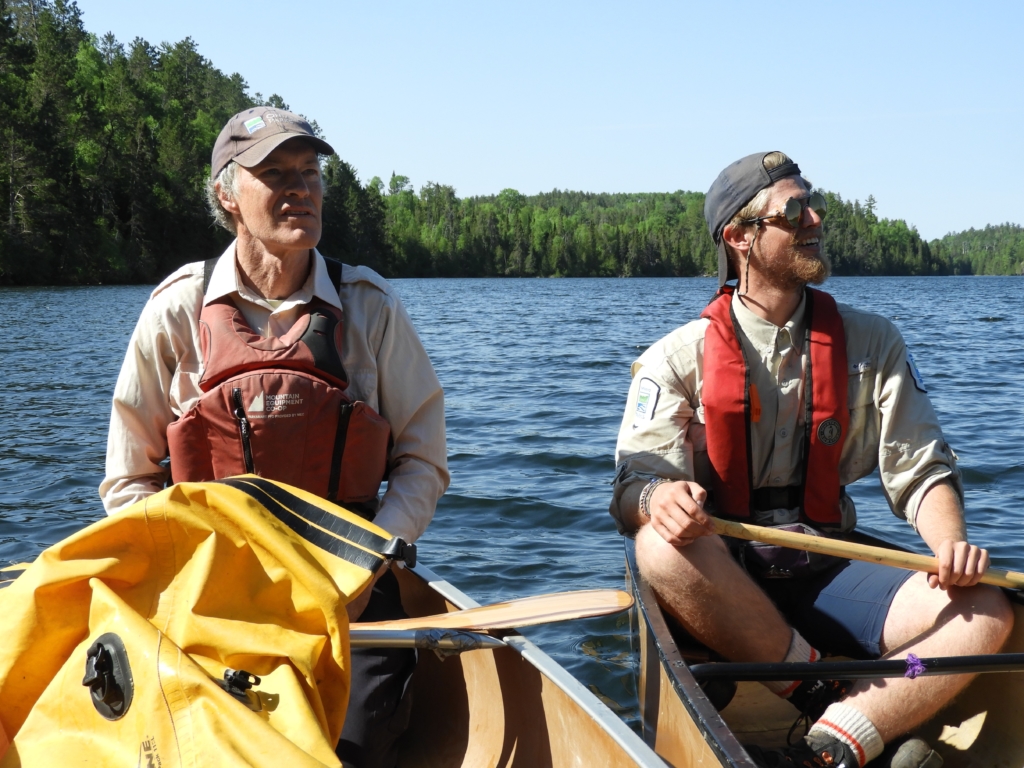 In mid-June the Quetico Park Biology team (Park Biologist Brian Jackson and the Assistant Biologists Jared Walter Stachiw and Cat Langillle) along with QPP Information Specialist Jill Legault surveyed the red pine forest stands along Agnes and Kawnipi Lakes for fire-scarred tree samples. When a fire injures a tree, it creates a scar at the base of the tree referred to as a fire scar. Fire scars record the exact year and season that a fire occurred, which allows us to figure out how many times fire happened in an area. Fire is a natural and necessary process in Quetico’s forests and provides opportunity for regeneration of pine species and rejuvenation of available nutrients in the soil (to name just a couple of the numerous positive impacts of fire in Quetico’s forests). 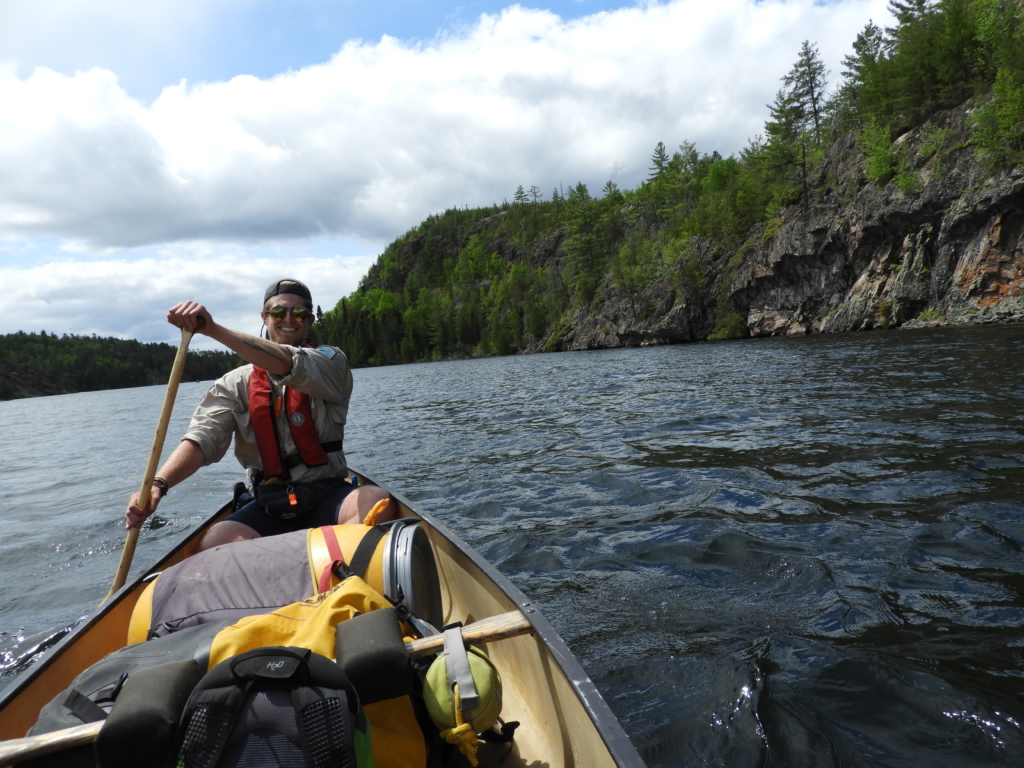 As an assistant biologist in Quetico Provincial Park for the last three years, working on
behalf of the Quetico Foundation, it has been both my job and my pleasure to collect
scientific data in the remote wilderness of Quetico. The work I have done has been
varied, including vegetation surveys, bat monitoring, and dendrochronology, which has
provided me with innumerable, invaluable experience in my career path. The work done
by the assistant biologist supports the efforts of Quetico Park’s biologist to manage this
wilderness area with the primary goal of maintaining and/or increasing ecological
integrity. Being able to support this endeavour has given me immense personal
satisfaction as I feel like I am helping to manage this rugged corner of Canada that I
have fallen in love with. 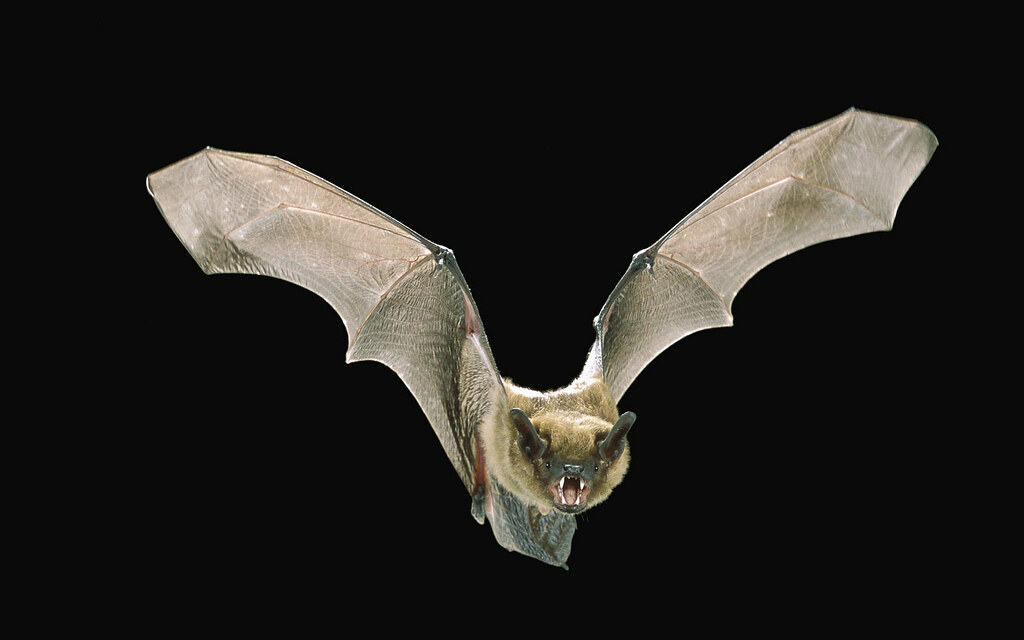 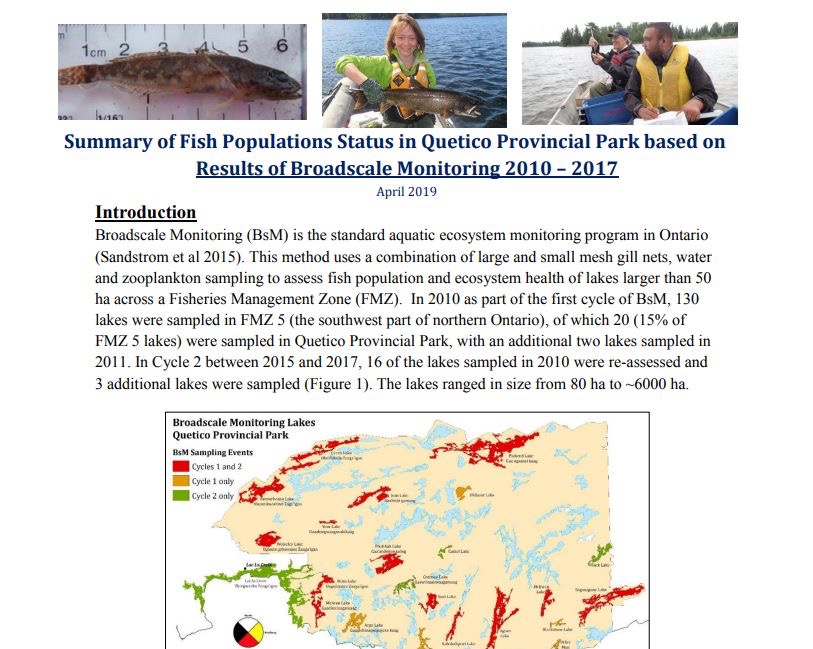 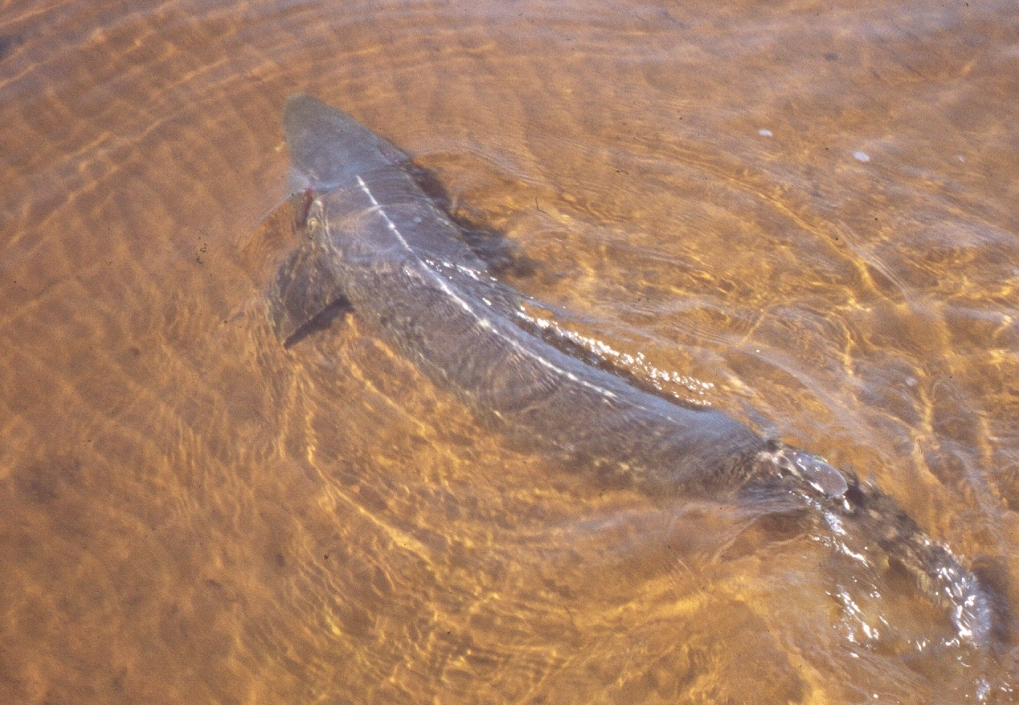 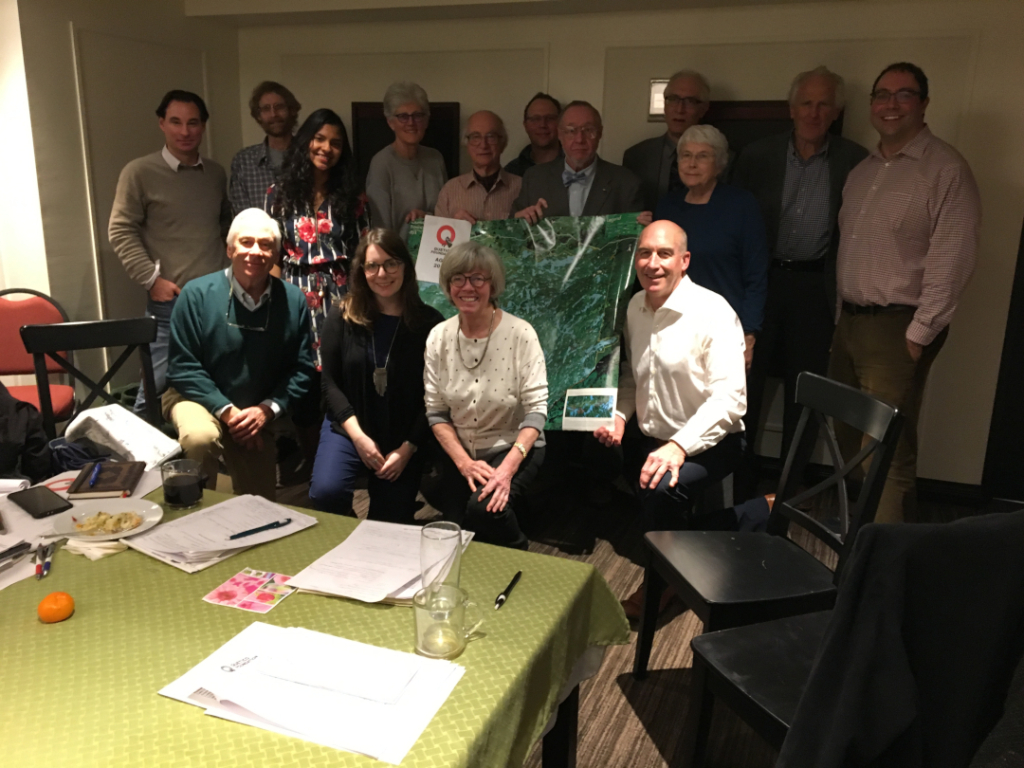 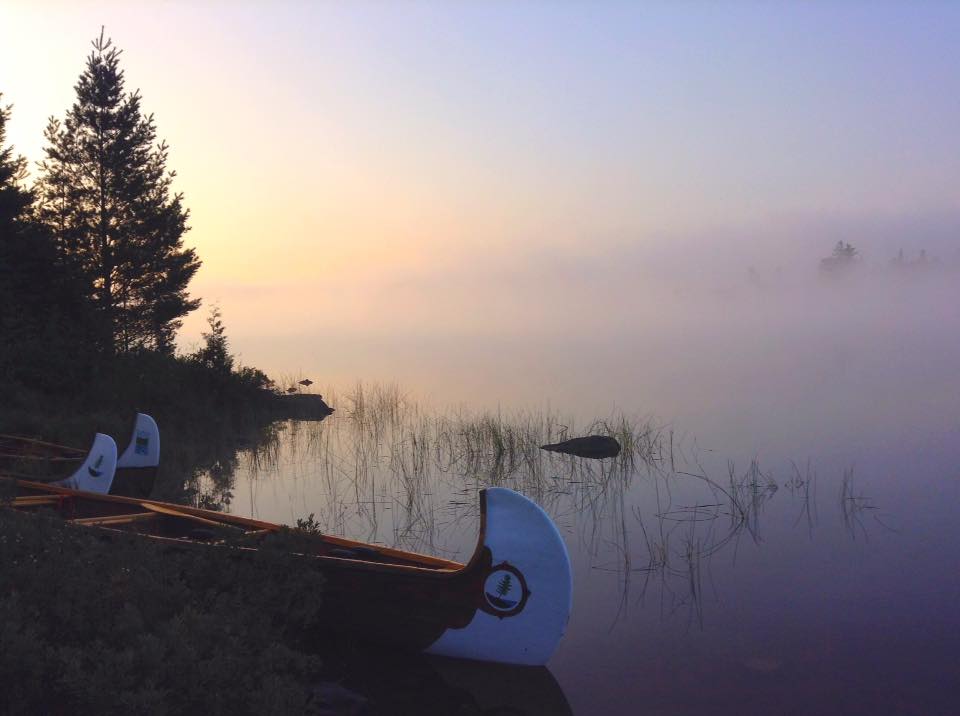